The population of Brown Bears on the Alaska Peninsula is at an all time high. With an abundant supply of salmon, berries, moose, caribou, ground squirrels and carrion the refuge provides excellent habitat for numerous brown bears. The refuge supports one of the highest concentrations of brown bear in Alaska.

According to Becharof National Wildlife Refuge staff, Becharof and Alaska Peninsula N.W.R. combined are thought to be home to as many as 3000 of these magnificent animals. Bears range from mountaintops to seacoast. Depending on weather conditions and food supply, Alaska Peninsula brown bears usually leave their dens in April/May and return in October/November. Some bears will den much later, or not at all, if adequate food sources are available. 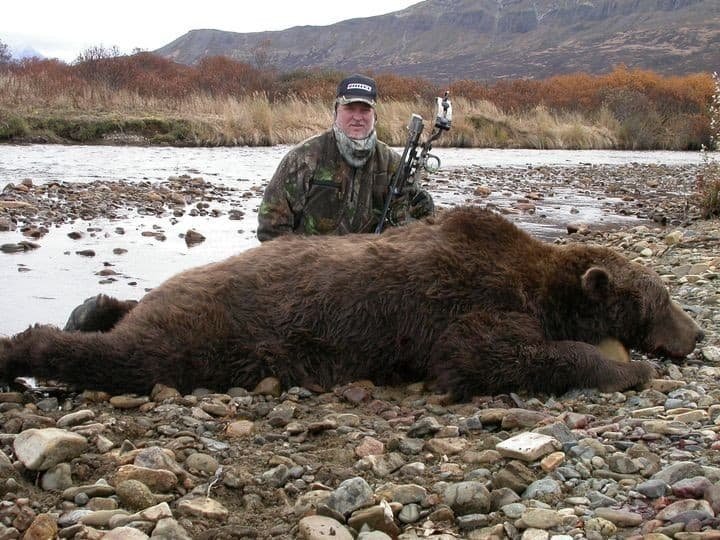 My hunting concessions span the entire width of the Alaska Peninsula, from Bristol Bay on the west to the Pacific Ocean on the East. One of my areas is the Island Arm of Becharof Lake it provides most of the spawning and rearing habitat for sockeye and Coho salmon within the Becharof drainage. Consequently, it host one of the highest density of Alaska Peninsula brown bears feeding on spawning salmon that occurs in Becharof Refuge and the Ugashik area. My other area borders Shelikof Strait on the ”Pacific side” of the Alaska Peninsula. This is tremendous bear habitat and we have harvested many bears over 10′ from all three areas.

I employ one guide per hunter. My guides love to hunt Alaska Peninsula brown bears! They average over 12 years guiding experience, some I have worked with for 20 years. Our bears average over 9 feet, with success rates over 90%. The bear season alternates between fall and spring on odd years (2013, 2015, etc.) we hunt in the fall and on even years (2014, 2016, etc.) we hunt in the spring. After every spring season the Alaska Peninsula ”rests” for 18 months until the next fall season!